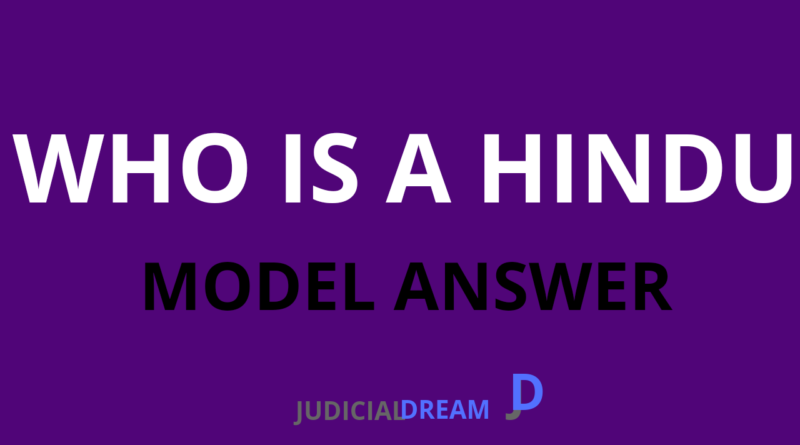 The Constitution of India states that India is a secular country. Here the word “secular” separates the Government of India from religion. It basically means that the government of India has no religion of its own and it respects all the religions. That is why, if the government enacts any law (whether public or private), that law is applicable upon each and every person irrespective of religion.

But, on the other hand, Constitution of India empowers the government to enact a personal law. Now the question arises, “What is a Personal law?” The Personal law is that law which is applicable upon particular group of persons, Community or people of one particular religion.
The word “Hindu” in the Hindu Marriage Act, 1955 shows that this act is applicable only upon Hindus and not upon any other person who is not Hindu. So, we can say that Hindu Marriage Act, 1955 is a personal law.

The Hindus constitute the majority community in India. But, till this day there is no precise definition of term “Hindu” available either in any Statute or in any Judicial Pronouncement.
Actually, it is very difficult to give a precise definition of term “Hindu” because it includes so many sects and communities and their religious practices are different and their way of worshiping is also different.

But section – 2 of Hindu Marriage Act 1955 tries to define the term Hindu.
According to section- 2 a person can be a Hindu by two ways:-
• Hindu by Religion.
• Hindu by Birth.

Hindu by Religion:-
According to this section, a person can be a Hindu if he is Hindu, Sikh, Jain or Buddhist by religion. He will be considered as a Hindu if he converts or re- converts into Hindu, Sikh, Jain or Buddhist religion.
According to the section, the general rule is if a person who is domiciled in a territory in which this act is applicable and he is not Muslim, Jew, Parsi and Christian then he will be considered as Hindu. But, if before the enactment of Hindu Marriage Act, 1955, abovesaid person was not governed by Hindu Law, Customs or usages then in such a situation the provisions of this act would not be applicable upon that person and he will not be considered as Hindu.

In a leading case of Chandrasekhar vs. Kulandaivelu (AIR 1963 SC) Supreme Court held that “if a person is a Hindu by Religion but he does not practice, profess or follow the tenets of Hindu Religion or if he is atheist or adopts western way of life, then also he will be considered as Hindu.”

Hindu by Birth:-
According to this section, if both the parents of child are Hindu then the child will be considered as Hindu. If one of the parents of child is Hindu and another one is of different religion but the child has been brought up as Hindu then in such a situation child will be considered as Hindu.
In a leading case of Maneka Gandhi vs Indira Gandhi (AIR 1984 Del) the Hon’ble Court considered Sanjay Gandhi as Hindu even his father was Parsi because Sanjay Gandhi’s mother Indira Gandhi was Hindu and she openly brought up Sanjay Gandhi as Hindu.

The above was said by Supreme Court in a leading case of Surajmani Stella vs. Durga Charan (AIR 2001, SC).
According to this section, if a person is not a Hindu but he is not a Muslim, Jew, Parsi or Christian also, then in such a case he will be considered as Hindu and the provisions of this act will be applicable upon that person.

In our country, there is no uniform law. That is why, to bring the uniformity, the provisions of this act are applicable upon a person who is not a Muslim, Parsi , Jew or Christian.