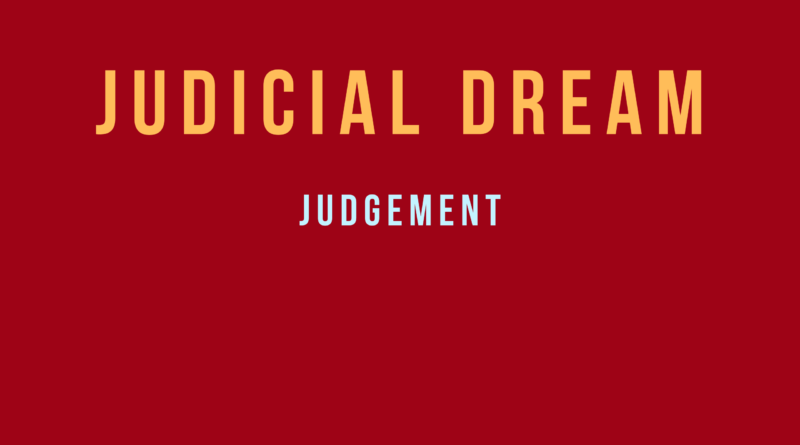 FACTS – The respondent filed a civil suit on the original side of the Delhi High Court for the recovery of Rs.81,24,786.23p against the appellant. The appellant contested the suit by filing written statement on various grounds, inter alia, claiming that the goods were not accepted or returned due to reasons mentioned in debit notes and in fact, the respondent owes Rs.88,785/- to the appellant.

After the admission and denial of documents and framing of issues, the suit was set for trial. On 29th September 2015, Shailendra Garg, the sole proprietor of the appellant was arrested by the Rajasthan Police in an unrelated case, and thereafter he was sent to judicial custody and detained in Central Jail, Jaipur. He was released on and it was the appellant’s case that due to the detention, the appellant was prevented from effectively contesting and participating in the civil suit. Consequently, since none appeared for the appellant, the Joint Registrar, Delhi High Court, directed closure of the defence evidence.

The counsel for the appellant on 9th September 2016 filed an application for the issuance of production warrant of Shailendra Garg. The Additional District Judge, (Central), Tis Hazari, Delhi, rejected the request and the suit was nevertheless adjourned to 4th November 2016 for recording of defence evidence. On 4 th November 2016 the counsel for the appellant did not appear and the defence evidence was closed. On 8th November 2016, an ex-parte judgment was passed, decreeing the suit filed by the respondent in the sum of Rs.81,24,786.23p along with pendente lite interest at the rate of 24 percent per annum and post decree interest at the rate of 18 percent per annum till the realization.

Shailendra Garg was released on bail and within 10 days of his release he filed an application under Order IX Rule 13 of the Code for setting aside of the ex-parte decree.

It was pleaded that the High Court had failed to issue production warrant for appearance of Shailendra Garg before closing the defence evidence, despite the fact that earlier production warrant had been issued and Constable Jitendra Kumar had appeared seeking clarifications. The application under Order IX Rule 13 of the Code was allowed, setting aside the ex-parte decree, restoring it to its original number and listing it for defence evidence.

Thereupon, the respondent preferred a miscellaneous petition under Article 227 of the Constitution of India, was allowed primarily for the reason that the counsel for the appellant had applied and taken certified copy of the judgment dated 8th November 2016 in December, 2016 which shows that the appellant was represented by his counsel even at that stage. The contention of the appellant that he acquired knowledge of the decree only after his release from custody was wrong. In view of the aforesaid facts, the trial court should not have accepted the argument that the appellant and his counsel were not in communication during the period when the appellant was in judicial custody.

CAUSE – Miscellaneous petition under Article 227 of the Constitution of India, which vide the impugned order dated 4th July 2019 had been allowed.

ISSUE – Whether the High Court was justified and correct in law and on facts in exercising powers under Article 227 of the Constitution of India to set aside the order dated 24th July 2018 allowing the application under Order IX Rule 13 of the Code of Civil Procedure, 1908.

DECISION – SC held that the impugned order is contrary to law and cannot be sustained for several reasons, but primarily for deviation from the limited jurisdiction exercised by the High Court under Article 227 of the Constitution of India. The High Court exercising supervisory jurisdiction does not act as a court of first appeal to reappreciate, reweigh the evidence or facts upon which the determination under challenge is based. Supervisory jurisdiction is not to correct every error of fact or even a legal flaw when the final finding is justified or can be supported. The High Court is not to substitute its own decision on facts and conclusion, for that of the inferior court or tribunal.

The jurisdiction exercised is in the nature of correctional jurisdiction to set right grave dereliction of duty or flagrant abuse, violation of fundamental principles of law or justice. The power under Article 227 is exercised sparingly in appropriate cases, like when there is no evidence at all to justify, or the finding is so perverse that no reasonable person can possibly come to such a conclusion that the court or tribunal has come to. It is axiomatic that such discretionary relief must be exercised to ensure there is no miscarriage of justice

The factum that the counsel for the appellant had applied for the certified copy would show that the counsel for the appellant was aware that the ex-parte decree had been passed on the account of failure to lead defence evidence. This would not, however, be a good ground and reason to set aside and substitute the opinion formed by the trial court that the appellant being incarcerated was unable to lead evidence and another chance should be given to the appellant to lead defence evidence. The discretion exercised by the trial court in granting relief, did not suffer from an error apparent on the face of the record or was not a finding so perverse that it was unsupported by evidence to justify it.

Thus, the reasoned decision of the trial court on elaborate consideration of the relevant facts did not warrant interference in exercise of the supervisory jurisdiction under Article 227 of the Constitution. Consequently, the court set aside the impugned order allowing the application under Order IX Rule 13 of the Code and setting aside ex-parte decree and the judgment dated 8th November 2016.